Back in May, I had the pleasure of listening to a talk by Richard Pattison from Sky News where he talked about how they have managed to start replacing their Satellite trucks (which are extremely expensive to own and run) with the new solutions using LTE.

One of the advantage of LTE over 3G/HSPA+ is that the uplink is as good as the downlink which wasn't really the case in earlier generations. What this means is that you can use your phone to do a live video call and use that for broadcasting of real time information. The Sky News Tech team has some interesting tweets on this.

An example of the video quality could be seen from this clip here:

The Dejero App is an interesting one that can allow bonding of Cellular + WiFi and provide a combined data rate. 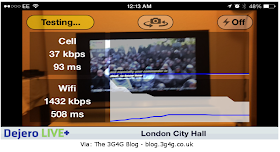 I was having a discussion yesterday on Twitter because we term this bonded cellular and WiFi as 4.5G. There are many proprietary solutions available for using them together but the standardised one is coming in standards soon.

Sky news have managed to set up new standards by having 12 feeds simultaneously broadcasting  (all based on Iphones and Ipads) during the European elections.

All this has been possible due to an amazing 4G network by EE and being able to negotiate a 500GB (0.5TB) data package.


Anyway, you can read the complete paper below: